I know it's taken slightly longer than I anticipated but I've finally gotten around to doing the post I said I would make about my Brown Zip Cuban Personal Organiser.

I may not use my Brown Cuban Filofax as much as my Personal Pink Classic which is my favourite but I really love it.  It has virtually everything I could possibly ever need in a Filofax. This particular Filofax has numerous pockets, 2 pen holders, a larger ring mechanism, Italian leather that is so luxuriously soft and contrasting cream stitching.  I'd wanted one for some time and was lucky enough to be able to get one that was second-hand but in perfect condition. 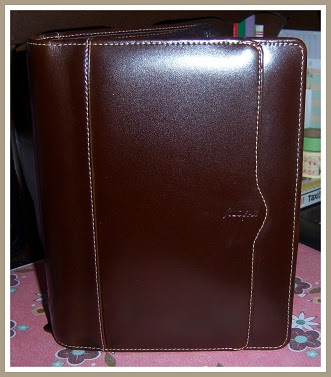 The Cuban has two zips, one on the outside that wraps around three sides of the Filofax and another concealed away just beneath one of the pen loops. There's a zipped concealed pocket beneath the pen loop which is synonymous with so many Filofaxes There are seven cut out credit card pockets and one large deeper one below them. There’s also a full length pocket for holding and protecting even more documents that's concealed behind the credit card pockets. I could probably put a note pad inside as well but I think that would be a little too much for me. The outside of the Cuban has another full length pocket with a concealed magnetic closure. The zip that is on three sides gives me extra security with less worry about losing items. 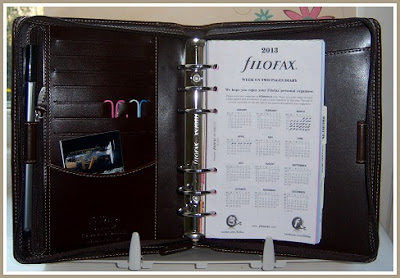 What first attracted me to the Cuban was its larger ring size at 30mm it allows more capacity for holding stationary and inserts.  I often find that the regular 23 mm just aren't sufficient for my personal needs.  The Italian leather not only looks beautiful but feels amazing as well.

I have to be careful about which pens I place in the loops because the pen tops can sometimes scratch the leather interior. As I tend to overstuff my Filofaxes it can sometimes feel a little weighty maybe because it is slightly larger than personal Filofaxes that don't have zips. 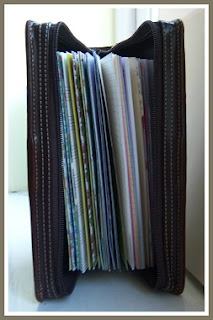 Brown Cuban Zip Personal Filofaxes are no longer so easy to get hold of but I know that Filofax and other retailers still stock the Chilli one which is equally as nice.
Even though I don't use it every day would I part with my Cuban?  Definitely not, I haven't had it long but I love it. I haven't so far given any of my Filofaxes names but I'm very tempted to call this one September. September was a character in the television series Fringe and played by Michael Cerveris. I will just say they both have some characteristics in common. 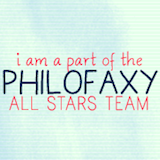